I keep getting questions regarding some of the more technical aspects of my 2.5D shading implementation in my earlier YouTube videos like this one, so I want to dedicate an entry here to explaining a little bit what's going on behind the scenes there and fielding questions.

First things first, the original codebase at the moment is very outdated (still on XNA 3.1) and very tangled. It was one of my first projects, it's very badly organised and, at the same time, I do have plans for it in the future, so I won't be releasing the whole source code for the time being.
That said, let's take a look at the basics.


The idea was very simple - to do away with drawing polygons for the most part and, instead, deal with geometry in screenspace, as an extension of the sprites you'd normally use in a 2D engine.


Right off the bat, I'll come out and say that this isn't necessarily as great a performance-saving idea as it seemed to me back then. You're still doing a lot of work across the whole screen with pixel shaders, which is where the majority of the computation time comes in anyway. Moreover, you're essentially loading every sprite three times over, so you have a pretty high memory usage too (and unlike in 3D rendering, where you can easily have much smaller resolution normal textures with high-resolution diffuse maps, you can't really do that here without sacrificing quality dramatically).

I'm pretty sure something similar could implemented in say, Unity3D, with the right scripting and customised shaders, but I don't think this approach will ever be much of a performance saver - certainly not as much of one as I thought back at the time, when my understanding of computational expenses was still very limited. And while on more modern handheld devices you could probably get something like it to run, it'll probably need to be a fairly pared-down version due to restraints on how much per-pixel computation you can do and due to memory restraints.

Bear in mind you could easily get a very similar effect with a fully 3D engine, rendered out with an isometric perspective. If you don't make the geometry too complicated, your memory usage would likely be significantly lower as you'd be able to share textures between objects, while the per-pixel computation overhead would be the same as with the 2.5D engine, if not lower.

By going 2.5D you give up quite a few things that would come naturally to a properly 3-dimensional engine - things like having a proper zoom function.


With that in mind, here's what I see as some of the advantages. The main reason to go down this route, I think, mostly comes down to content creation and stylistic considerations since, as I've pointed out above, there's no real reason to do so for performance or graphics, with one exception.

I think, graphically, the only real advantages here are the potential capacity for dealing with really huge polycounts by baking them into your sprites and getting a limited sort of multisampling for free, as your assets are likely going to come out of 3DS Max nicely antialised (I say 'limited' because geometrical intersections are not going to antialias themselves and, indeed, can end up looking quite rough). Even so, they're a bit dubious - you don't really need huge polycounts and even if you do:
But here's a few boons contentwise. The main, really, I think is that you can do a lot of the texturing work much more easily on flat sprites. While you need a 3D mesh initially to generate a rudimentary colour map, normal map and heightmap, you can then do a lot of extra detailing in an image editor like Photoshop. You can bake in very high-quality ambient lighting from your 3D program without any overhead and you can also potentially save time on a lot of UV mapping and texture creation.

You also get a little bit more freedom with how you go about creating assets in the first place - while you can start off making a simple mesh for calculating normal and height data, you could use a flat photo, or a hand-drawn sprite for the colour, essentially giving it extra depth.


Quite briefly, this is how I generated the assets I used in my videos and here's a sample of one. I'm going with the Utah teapot on this: 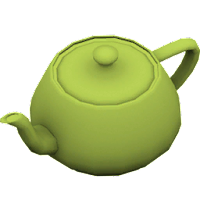 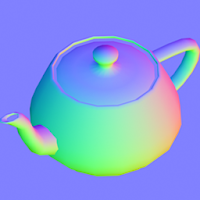 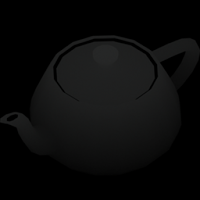 To save on memory a bit, only the colour map actually has an alpha - the rest borrow the colour map's alpha channel when they're being drawn. Also, as you can see, the colour map was rendered with some basic 3DS Max ambient occlusion.

All three I rendered in 3DS Max in my case, though it might be easier to create an XNA-based tool for generating the maps more reliably via custom shaders. Or, perhaps, you could just Maxscript it. 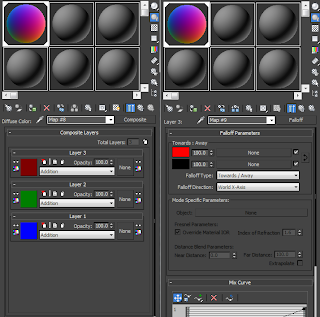 You're just adding together a red, green and blue object-space falloff map, it's as simple as that.

As far as the height map goes, you've got a few ways to go with that one. In my case, I set up a vertical gradient with a bit of extra dithering and worked out what the top value should be for every given object. The heightmap, like the normal map, is of course in worldspace.

The issue with the heightmap though is that you end up being restricted by the range of colours in it quite badly. The purpose of the heightmap is to, literally, state the worldspace height of every pixel - and that means you need a range of values as large as your object is tall, in pixels. So if you stick with a grayscale 256-colour bitmap, you run out of values pretty damned quickly - if your image is more than 256 pixels high, it's going to run out of height.

My solution, a fairly hacky one, was to displace the gradients in the RGB channels separately by a unit and, when calculating the height of a pixel, just add them for the result. That gave me a maximum height of 768 pixels (once you get really high, you can actually let the gradient clamp, as long as you don't have point-lights that high up to mess things up).

Alternatively, if you make your own content preprocessor, you could do more elaborate things, such as multiplying the RGB values to get the output. That's just something that's harder to do with Max materials on the fly (and you'd need to think about how you render it if you want to change the object's height).


Last but not least, I'll go over what actually happens in the render pipeline in some broad strokes.

A neat trick you get to do at this stage is that you can use the heightmap for depth testing. Now, the heightmap is in worldspace, so it doesn't exactly tell you how 'deep' into a scene a given pixel is, but it's good enough - if we have two objects occupying the same bit of space, one of them's grey, the other's white, that means the white object is higher up in worldspace than the darker object, which in turn means it has to be in front of it. So that's the basis of our depth query.

This is the shader that does it - as an extra parameter, it scales the heightmap by the scale of the object, allowing you to adjust for, well, scaling:

Now, this implementation is, again, far from being anywhere near optimal. For starters, each light involves a whole new pass being rendered across the entire screen, with no compensation for falloff (it also uses a really goofy light falloff curve I came up with, which never really peters out). As you can see below, it uses three texture samplers to feed in the screen as it was rendered with colour, normal and heightmap sprites, then uses all three to figure out the position of any given pixel. That's a lot of crap going on on a per-pixel basis.


I think overall it's pretty self explanatory otherwise. Between these two functions, that's the main chunk of the work being done, really.


To cap off, a few ways to improve on what I've got so far. There's definitely much that can be done to improve the efficiency of my shaders from, what was it, two? No, three years ago, goodness. It's been a while. But yeah, they're not great and drawing point lights in particular is a massive drain at the moment. If you wanted to do this for a handheld, your best bet would be to limit the number of lights on screen and do them with a single shader pass for all of them.

Secondly - and this is an important one - don't render more than you have to. I mean, the vast majority of the time, all you're going to be doing is moving the camera around while everything else remains static. So the best course of action is to do all the expensive pixel computations once and just keep a large chunk of the playable area in memory, if you've got the memory for it.

If a given area is just made up of lots of static sprites, you could even render your diffuse/normal/heightmap layers for the whole area and then dispose of all those other sprites to free up space, since you don't need them. You can then render dynamic objects on top of it all using depth testing.

Needless to say, when a dynamic object updates, you can draw it separately with lighting computed just for that object. So really, you only need to do the expensive light computation when the lights are actually moving around, and you'll probably want to keep that to a minimum (if you're concerned about performance or battery drain, anyway).

As it stands, the engine isn't doing any of that, so as I say, overall it's in actually a pretty basic state.
Posted by 9of9 at 20:52